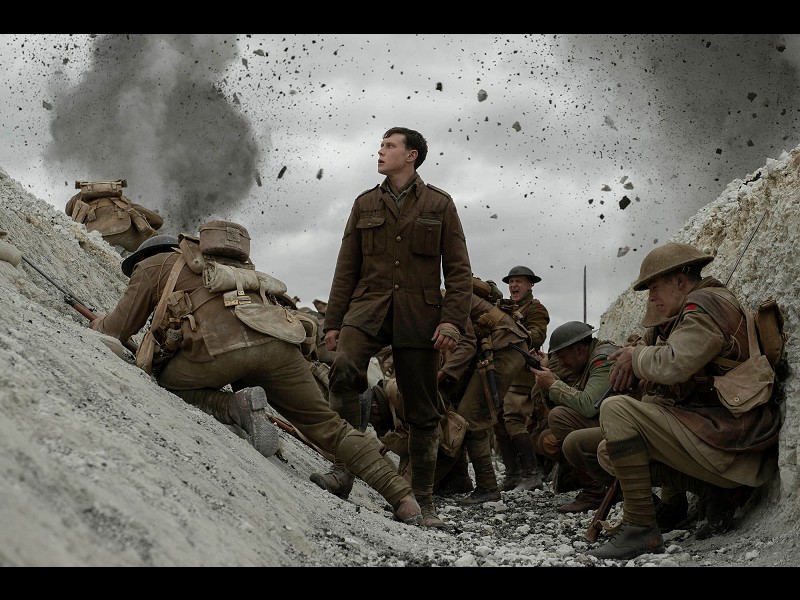 As the most technically accomplished war film to date, Dunkirk has just been stripped to second place.

Sam Mendes’ World War 1 epic tells of two young soldier boys; Schofield and Blake as they charge through enemy lines on a mission to save a certain massacre. Their orders from General Erinmore are crystal clear: they must make their way across trenches, mine-fields, battlefields and No-Mans-Land in France to hand-deliver (no radio)a message to Col. Mackenzie commander of the Second Battalion. It contains orders to call off a planned advance against the German army, falsely presumed to be weakened. It is a trap that could result in slaughter of two thousand troops, including Blake’s brother.

Armed with one of our greatest living “Lighting Cameramen’ DP: Roger Deakins, Mendes stalks these men, chasing behind them into their own unknown (so ours!) in one ‘continuous’ shot. As battalions clash, planes crash, and artillery assaults the senses, these two hapless braves must traverse across the battlelines over two days. 1917 is inspired by a true story told to Sam by his grandfather, who actually ran as a messenger on the Belgian front. Hence a terrifying, heart stopping, intimate story. (research Jack Whiting) A bruising two hours. You can’t move, dont try.