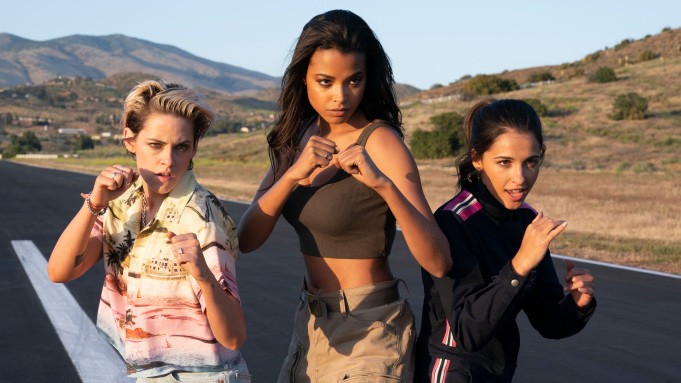 Kristen Stewart stars in an unnecessary, unwanted, trashy reboot tasked with giving the franchise a millennial update, Elizabeth Banks both writes and directs this new addition, adding contemporary themes (sustainability and gender politics) while still embracing the silliness of the franchise. (Charlie) Charles Townsend’s agency has expanded into a global espionage organisation, recruiting the most intelligent, fearless, highly trained (and ridiculously gorgeous) women around the world. Coming in from the cold of the indie circuit, Kristen Stewart plays Sabina, the comedic Angel with a criminal record and background as a New York heiress. Ringleader Sabina and former MI6 agent (Ella Balinska) Jane work alongside Elena, (Naomi Scott) a young engineer who has created a sustainable energy project for the greater good. Yet this technology, named Callisto, can also become “a perfect assassination machine” if it falls into the wrong hands. A plan is hatched by villains to sell Callisto on the black market and the Angels are summoned to save the world, fighting baddies in Hamburg and Istanbul. (research Rachel Williams) It might be poorly paced trash but their energy, sass and lack of warm clothing should keep you awake keep. Unless you’re 14, miss it.